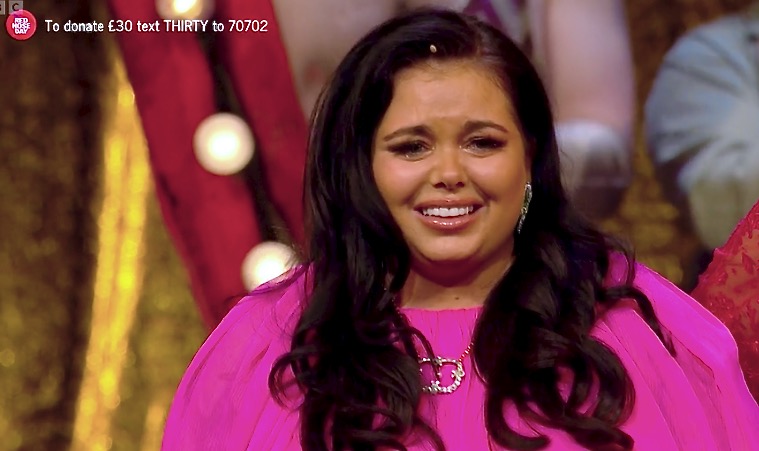 Former Gogglebox star Scarlett Moffatt proved one of the highlights of Comic Relief 2022 when she sang a medley of arias from the opera Carmen as one part of a star-studded quintet.

Scarlett, along with former EastEnders stars Nina Wadia and Tamzin Outhwaite, Helen George and comedian Rosie Jones, performed the arias live in front of 2,000 people at the London Coliseum – and millions more watching on television – and, while Call the Midwife star Helen clearly had a professional singing voice, it was the County Durham TV personality Scarlett who stole the show.

As one viewer on Twitter wrote: “Wow! Scarlett Moffatt has a lovely voice. Who knew?”

Another fan agreed: “I blinkin love @josierones and every time I see Scarlett Moffatt she gets more fabulous”.

These 5 women 😍 I blinkin love @josierones and every time I see Scarlett Moffatt she gets more fabulous. Awesome.March 18, 2022

The five women had just 24 hours to prepare for their Comic Relief challenge and throughout the show, snippets of their preparation were shown.

Scarlett said before the performance: “I’m not a professional singer, I’ve never had a singing lesson before, never mind opera.

“People train opera for like years, sometimes decades and we’re getting not even 24 hours, it’s crazy. I don’t regret signing up for it though, I think it’s going to be amazing.”

Watch the five women perform on Comic Relief on iPlayer (from 2hrs 42mins).

And amazing it was. After the five-minute performance, the quintet took rapturous applause from the opera-loving audience and host Sara Cox embraced a clearly overcome Scarlett.

She said, through tears: “Everyone is born knowing Comic Relief and to be a part of it in this way…”

Rosie added: “I’m glad that I did it because it was so far out my comfort zone and I just want to show everyone out there that whatever ability they have, they can do it”.

One of the team — who prepared the women for the opera challenge — mezzo-soprano Claire Barnett-Jones, tweeted: “In tears here at home, what an achievement and you all smashed it!”

The arias were undoubtedly the highlight and climax of Comic Relief 2022 and helped the Red Nose Day appeal to reach a total of £42,790,147 as of midnight on Friday. The total raised will this year support vital work in the UK and around the world tackling homelessness, domestic abuse, poverty and mental health problems.

The BBC One entertainment extravaganza had earlier been slightly derailed by the withdrawal of hosts Zoe Ball and Joel Dommett, as well as Kylie Minogue, who was billed to appear in a sketch with the cast of Ghosts, after they tested positive for Covid.