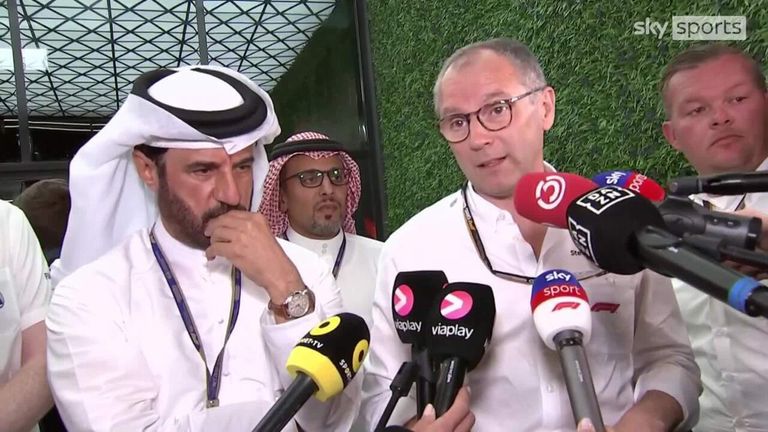 F1 CEO Stefano Domenicali has said the Saudi Arabia Grand Prix will go ahead after there was an attack at a nearby oil depot.

F1 CEO Stefano Domenicali has said the Saudi Arabia Grand Prix will go ahead after there was an attack at a nearby oil depot.

Formula 1’s Saudi Arabian GP is set to go ahead despite concerns from drivers in lengthy meetings after an attack on an oil depot close to the Jeddah circuit.

F1’s grid of 20 drivers met for over four hours after practice on Friday and talks – which included team bosses and F1 chiefs – continued until 2.30am local time in Saudi Arabia.

Sky Sports understands that while drivers raised concerns over safety in the wake of a missile attack on a nearby oil facility earlier on Friday afternoon – with the lengthy meeting suggested some may have wanted to boycott – they unanimously agreed that it would continue.

On Saturday morning, F1 and the FIA reiterated that final practice and qualifying would go ahead as planned later, with Sunday’s race to follow.

“Formula 1 and the FIA can confirm that following discussions with all the teams and drivers, the 2022 FIA Formula 1 Saudi Arabian Grand Prix will continue as scheduled,” read a statement. 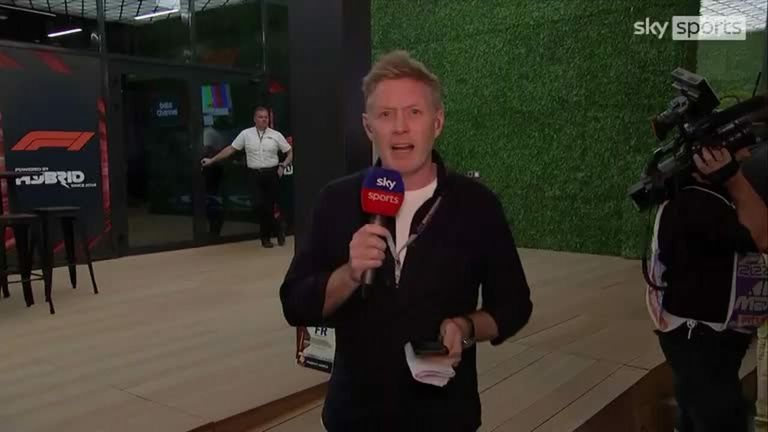 Sky F1’s Simon Lazenby provides an update on developments after a fire erupted at an oil depot in Jeddah, which Yemen’s Houthi rebels claim was an attack by the group.

Sky F1’s Simon Lazenby provides an update on developments after a fire erupted at an oil depot in Jeddah, which Yemen’s Houthi rebels claim was an attack by the group.

“Following the widely reported incident that took place in Jeddah on Friday, there has been extensive discussion between all stakeholders, the Saudi government authorities and security agencies who have given full and detailed assurances that the event is secure.

“It has been agreed with all stakeholders to maintain a clear and open dialogue throughout the event and for the future.”

Yemen’s Houthi rebel group have taken responsibility for the attack.

An oil depot – around seven miles from the track and owned by F1 sponsor Aramco – was set ablaze during first practice in Saudi and a large black smoke cloud could be seen from the circuit.

The fire was still burning late on Friday night and there was still smoke pouring into the sky on Saturday morning.

Saudi Arabian authorities say there were no casualties from the attack.

Final practice begins at 2pm on Sky Sports F1, with qualifying to follow at 5pm

Before the F1 drivers continued their meetings in the Jeddah paddock, the sport’s president Stefano Domenicali insisted they had received unanimous support from drivers to continue and “total assurance” about safety from authorities.

The attack took place during first practice, which continued as normal, though there was a 15-minute delay to the start of second practice as drivers and team principals met with F1 president Domenicali and the FIA’s Mohammed Ben Sulayem.

There was another meeting following P2, which was also attended by a Saudi delegation, after which the F1 and FIA chiefs emerged at 10:40pm local time and insisted the Grand Prix would be going ahead.

“We have received total assurance of the country’s safety first,” said Domenicali. “They have placed all the systems to protect this area. So, we feel confident that we have to trust the local authority in that respect. We will of course go ahead with the event.”

Ben Sulayem added that attackers were “not targeting the track”. 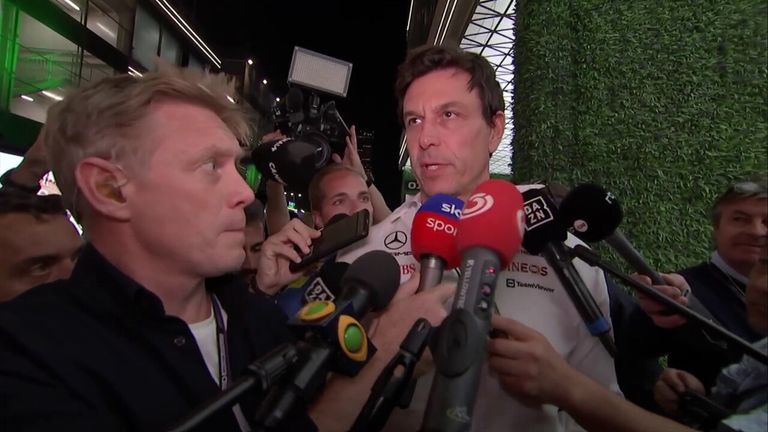 Red Bull’s Christian Horner and Mercedes’ Toto Wolff say they have been assured safety and have come to a unanimous decision to keep racing after a nearby oil outlet was attacked at the Saudi Arabia GP.

Red Bull’s Christian Horner and Mercedes’ Toto Wolff say they have been assured safety and have come to a unanimous decision to keep racing after a nearby oil outlet was attacked at the Saudi Arabia GP.

“Of course, we have checked the facts from them and we have had the assurance from the high authorities of the safety here and let’s go racing.”

Mercedes boss Toto Wolff said: “It was a good meeting, the drivers are going to talk now at a drivers’ meeting. We are the team principals, we’ve been assured we are protected here and it’s probably the safest place you can be in Saudi Arabia at the moment and that’s why we are racing. [It was a unanimous decision] By the team principals, yes.”

Red Bull principal Christian Horner added: “I think the sport has to stand together collectively. Any act of terrorism cannot be condoned and sport shouldn’t be bullied into a position – a situation like that just isn’t acceptable. Stefano and the president are dealing with it, there has been all of the assurances from the organisers and we’ll be going racing.”

The drivers, who had their scheduled media commitments cancelled, then met to discuss the situation.

Neither F1 nor the FIA have confirmed the blaze was caused by an attack.

However, Yemen’s Houthi rebels claimed responsibility for a barrage of attacks on the kingdom, according to the Associated Press, while the Saudi Motorsport Company also referenced an attack.

“We are aware of the attack on the Aramco distribution station in Jeddah earlier this afternoon,” a statement read.

“The race organisers remain in direct contact with the Saudi security authorities, as well as F1 and the FIA to ensure all necessary security and safety measures continue to be implemented to guarantee the safety of all visitors to the Formula 1 STC Saudi Arabian Grand Prix as well as all drivers, teams and stakeholders.

“The race weekend schedule will continue as planned. The safety and security of all our guests continues to be our main priority and we look forward to welcoming fans for a weekend of premium racing and entertainment.”

The blaze was centered on the same oil depot that the Houthis had attacked in recent days.

The al-Masirah satellite news channel run by Yemen’s Houthi rebels claimed they had attacked an Aramco facility in Jeddah, along with other targets in Riyadh and elsewhere. The report provided no further details.

Saudi state TV acknowledged that a “hostile operation” had taken place at the Aramco facility in Jeddah, with Reuters reporting there had been no casualties and that the fire was under control.

All driver media sessions were cancelled on Friday evening, although near the end of first practice Verstappen said on team radio: “I smell a bit of a burning feeling. I am not sure if it is my car, or another car.”

His engineer Gianpiero Lambiase replied: “We are happy it is not your car.” 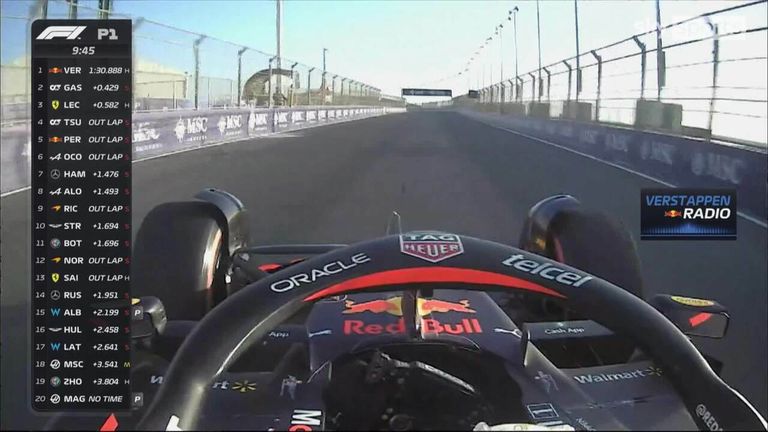 Max Verstappen stated he could feel ‘burning’ in his Red Bull F1 car during first practice at the Jeddah Corniche Circuit.

Max Verstappen stated he could feel ‘burning’ in his Red Bull F1 car during first practice at the Jeddah Corniche Circuit.

Explaining the situation in Jeddah

“We have learnt that the explosion was caused by an attack on an Aramco oil plant setting two tanks ablaze.

“Reuters have reported there are no casualties.

“Houthi rebels from Yemen have claimed responsibility for this, they did so soon after the event on a satellite news channel they run. There has been an ongoing conflict in Yemen, government forces aided by a Saudi-led coalition have effectively been in a civil war with rebels for the past seven years and these rocket attacks have been a fairly regular yet infrequent occurrence and Jeddah has been targeted before but shocking that it could happen during such a big event.

“It took a while for F1 to stand up the reports that it was indeed an attack, that they wanted confirmation from the Saudi authorities. What F1 have said though is that they have been in close contact with the relevant authorities over the situation, as they still continue to call it, today.

“The authorities have confirmed that the event can continue as planned.

“Formula One knew about the possibility of these rocket attacks before they came out here. I spoke to Prince Khalid, who is the Chairman of the circuit at Silverstone and he had assured me the air defence systems were adequate enough to stop an attack getting through.

“Domenicali is on site and able to deal with this situation. It was a little surprising when we heard it was a deliberate attack because what is there to say what those individuals might attack next. They have never given any indication they would attack the Grand Prix itself of course but does it have to be considered a health and safety risk.

“It all happened very quickly. Formula One does exist, if I am honest, in a little bit of a bubble away from the significant events from around the race tracks around the world and the show carries on.”

“At face value, at least, Formula One and the race promoter admitted that the safety of all our guests continues to be the priority and we look forward to welcoming fans for a weekend of entertainment.”