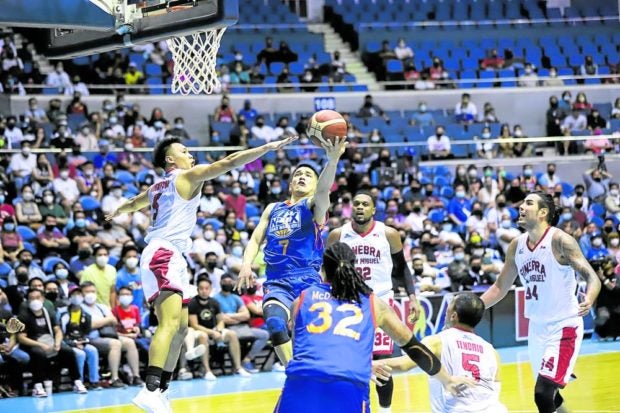 The Road Warriors hope Kevin Alas (No. 7) will provide them with much-needed firepower against a deep and experienced Gin Kings. —PBA IMAGES

Yeng Guiao takes pride in having whipped mediocre franchises into champions all throughout his PBA coaching career.

He also knows for a fact that it is this NLEX crew that has so far taken him the longest in making its mark—and that they’re not satisfied just getting to the semifinals for the first time.

“I am partly relieved that we made the leap—got this achievement—but at the same time, disappointed that it took us a longer time,” Guiao told the Inquirer over the phone on the eve of his Road Warriors’ Game 1 clash with crowd-darling and defending champion Barangay Ginebra in the Final Four of the Governors’ Cup at Mall of Asia Arena in Pasay.

Guiao admits to “missing the playoff atmosphere” and said that his players are ready to embrace the chance, never mind if they are the overwhelming underdogs against the Gin Kings starting at 6 p.m. on Wednesday.

“This is something new to us [as a team],” Guiao said. “But after the first two games, I am sure that we will catch on because of our personal experiences [in the playoffs]. But we have to bring it together [against Ginebra] as a team.”

Guiao steered defunct Swift and Red Bull and later on Rain or Shine to titles inside the first two years he was at the helm. He has been with NLEX since 2016 and the Road Warriors haven’t gotten this far before.

He recalls a meeting with NLEX bosses when he accepted the coaching job that he would be able to whip up a competitive team in “two to three years.”

“I feel relieved for the franchise, which has been expecting to put together a playoff team [since I arrived],” Guiao said. “They have supported my buildup, although along the way there have been hiccups. I just want to accomplish something for them.

“This is not personal. I want to start a tradition of competing at this level consistently,” added the seven-time champion. “I think with the team that we have, we can consistently perform at the semis level for the next few years.”

On the other side of the floor will be a Ginebra crew that Guiao describes as “overwhelming, very experienced and they have played together for a long time now.”

In the other half of the semifinal bracket, Meralco and top-ranked Magnolia square off starting at 3 p.m. The semifinals is a race-to-three affairs that will toss winners into the best-of-seven title series.

“It has taken us double the time getting here,” Guiao said. “But from hereon, our experience in these playoffs will carry us through to the next seasons. I honestly believe that I have a lineup that can compete at this level for the next two to three years.”

Facing Ginebra “is a problem,” Guiao said, as he rattled off the names of Japeth Aguilar, Christian Standhardinger, Scottie Thompson, LA Tenorio and Justin Brownlee in succession.

“They are all national team caliber players,” Guiao said. “I only have Kevin [Alas] as my Gilas-type player. And Ginebra has had—and learned—to play playoff basketball longer than we have, obviously.

“But he (Alas) is playing the best basketball of his life and will be key for us.

NLEX indeed faces an uphill battle in its series with Ginebra. But Guiao has always been one to embrace challenge.

Especially one that took quite some time to face. INQ