Edgar “The Chosen One” Berlanga marked his return to the ring with victory in his super-middleweight showdown against Steve Rolls on his main event debut in New York.

Berlanga sold out the Hulu Theater at Madison Square Garden to the tune of 5,158 fans, before prevailing via unanimous decision (96-94, 97-93, 97-93) to preserve his unbeaten record.

The 24-year-old, who began his professional career with 16 first-round knockout victories, promised “fireworks” against Rolls on Saturday night.

It wasn’t the sterling knockout Berlanga sought, but it was an important step forward for the Brooklyn native on his return from injury.

The biceps injury did not flare up against the Canadian veteran, although Rolls enjoyed moments of success, especially with right hands to Berlanga’s midsection.

However, Berlanga finished the fight strongly, winning the final two rounds on all three judges’ scorecards, and he now focuses his attention on a potential June 11 date. 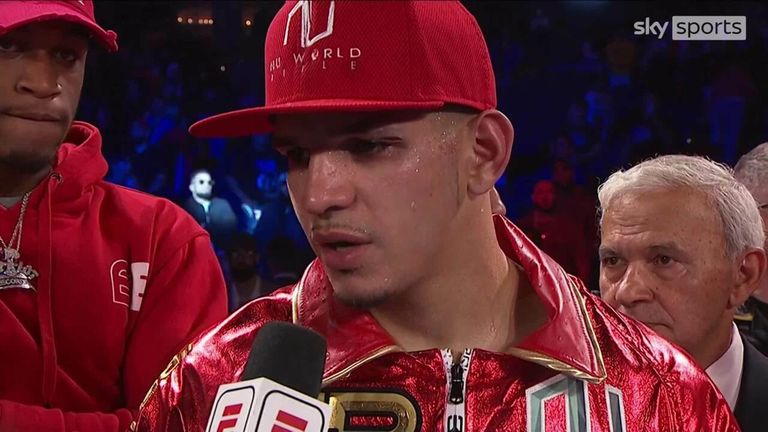 Edgar Berlanga said that his opponent Steve Rolls was running the whole fight which made it difficult for him to land shots after taking an unanimous decision victory.

“You could tell that he was fighting scared. Every time I reached in or threw something, he’s pulling back, running the whole fight,” Berlanga said.

“I was looking for a big shot. My corner was telling me use a jab. My elbow was bothering me a little bit. But I’m just happy we got the victory and moving forward.

“My elbow starting hurting me in like the second round but no excuses. We got the biceps torn in the last fight, came back in four months and got to it.”