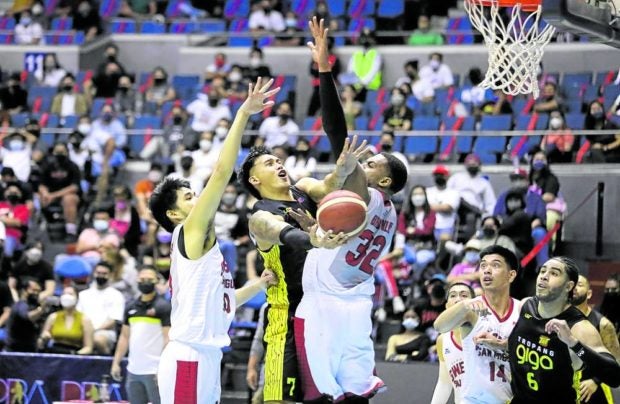 Holes in the Ginebra defense, like what Poy Erram (with ball) finds in this play, is what coach Tim Cone (right photo) is worried about. —PHOTOS FROM PBA IMAGES

Barangay Ginebra’s bid to successfully defend its PBA Governors’ Cup title remains alive, but after the elimination round ended last Friday, the Gin Kings found themselves in a not-so-pleasant situation for the playoffs.

After finishing sixth in the rankings, the crowd darlings drew No. 3 TNT for the second time this season—advancing against the very side that crushed their title-retention drive during the Philippine Cup. Making things eerily similar is that the Kings again have a win-twice task while facing the league’s hottest team to date.

Ginebra, a squad peppered with seasoned veterans and a handful of the league’s top-flight talents, has hardly lived up to its powerhouse tag this conference mainly because of manpower woes.

But for the seasoned Cone, there’s an even bigger culprit.

“We’d get 5-for-6 from [Rain or Shine’s] Kris Rosales, 8-for-9 from [TNT’s] Ryan Reyes. Teams are shooting over 50 percent against us from the three-point line every time,” he added while shaking his head in disbelief. “This is the Ginebra curse. Everyone gets so prepared to play Ginebra.”

That February night when Reyes hit eight triples had the Tropang Giga practically spilling the Kings all over the place, posting a 119-92 elimination round win that was practically decided in the first three periods.

The defending champions have been truly laughable on defense this conference, allowing an average of 103.8 points. They have been only better against two teams: the horrendous, 1-10 Blackwater and 2-9 Terrafirma, and were only able to hold opposing clubs under the 100-point mark just thrice during the classification phase.

“We did all we could to win [the game against NorthPort] only to face Ginebra,” he said in Filipino with a chuckle.

Roger Pogoy, one of the Tropang Giga’s top guns, offered an even better argument: You can’t just simply write off a Ginebra side playing with easily one of the best imports this league has seen in recent years.

“You can’t rely on confidence this time,” Pogoy told a pair of reporters, while touching up on TNT’s easy quarterfinal win over Ginebra last conference. “[Justin] Brownlee is in there.”

“We’ll just have to stick to our game plan, stay with what we’re usually doing,” he added.

TNT is coming into the showdown as the heavy favorite as far as momentum is concerned, with the Tropang Giga closing out the preliminaries with five straight wins.

Ginebra will have to truly tread carefully when the playoffs unfurl this Wednesday, but Cone, owing to his rich experience, already knows how to navigate such a perilous path.

“We got to play better defense, be more challenging, and get up [on the court] more,” he said.

Ginebra will be battling without spitfire guard Stanley Pringle and two-way veterans Jared Dillinger and Aljon Mariano, but Cone believes that the Gin Kings could pull through after tabbing a pride- and confidence-building win over a plucky Rain or Shine side last week.

“Even though they have handled us easily the last few times we have played them, I don’t think he would have chosen playing us,” he said of Reyes and TNT.

“We’re playing a little better now than when we were playing in the middle of the conference. We are hoping to give [TNT] a battle,” he went on.

“[W]e just need to focus on winning one game against them and not worry about anything beyond that first [game].” INQ