Alfredo Morelos is a doubt for Rangers’ clash against Celtic next weekend.

Morelos picked up a thigh injury while on international duty with Colombia and was unable to take part in his country’s 3-0 World Cup qualifying win against Bolivia.

The striker, who has scored 12 goals in 26 league appearances this season, has returned to Rangers to focus on his recovery and faces a race to be fit for Sunday lunchtime’s visit of Celtic, live on Sky Sports Football.

A statement from the Colombia Football Association read: “The coaching and medical staff of the Colombia Men’s Senior National Team reports that, after performing medical examinations on player Alfredo Morelos, a muscle injury to his left thigh was confirmed, which prevented him from participating in the previous commitment against Bolivia and in the same way does not allow him to participate in the next match of the Qualifiers for the FIFA Qatar 2022 World Cup.

“For this reason, the striker is called off to begin his recovery work. We wish the player a good return to his club.” Ally McCoist believes defeat for Rangers in next week’s Old Firm clash would end their defence of the Scottish Premiership title – but he cannot see his former side losing to Celtic.

Next Sunday’s clash at Ibrox, live on Sky Sports, will go a long way to deciding which Glasgow club will take the Scottish top-flight title come May, with Celtic three points ahead of reigning champions Rangers.

Ange Postecoglou’s Celtic are unbeaten in the Scottish Premiership since October – a run which has spanned 25 matches – and while the Parkhead club won the last Old Firm via a comfortable 3-0 victory, it has been Rangers’ only league loss since the first week of August.

“It’s one of the biggest Old Firm games, certainly the biggest for a while,” McCoist told Sky Sports News. “I don’t think Rangers can afford to get beat.

“Postecoglou has done a great job at Celtic and they have put themselves in a very good position. There’s three games coming up in the next month or so, if you include the Scottish Cup semi-final [between the Old Firm clubs], so Celtic won’t be a dull moment north of the border, particularly in the Glasgow area.

“But from Rangers’ point of view, defeat is unthinkable as I think it would make the gap [to Celtic] far too big.

“But I don’t see that, I think both teams have a little bit of form. Rangers in Europe have been excellent, domestically the form’s been a little bit up and down. They had a massive win at Dundee where they didn’t play particularly well but they are hanging onto Celtic’s coattails. And with this game coming up, I think we’re going to see a different Rangers.

“It’s a game they certainly cannot afford to lose and I think they’ll certainly go about their business in a manner that they have to win the game.” 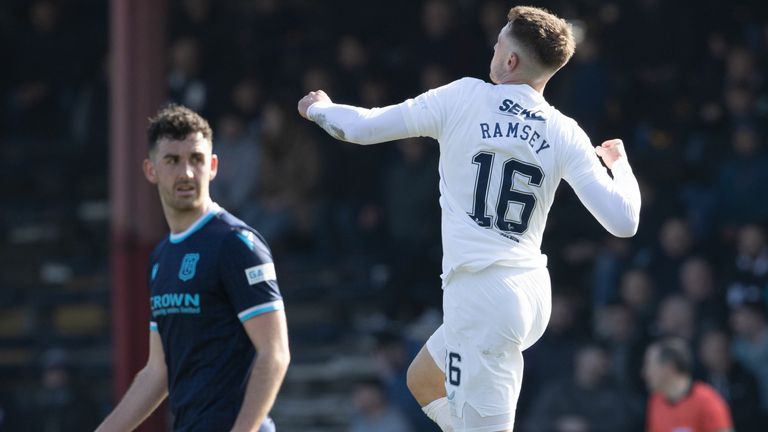 McCoist also highlighted Rangers midfielder Aaron Ramsey as a key factor while considering Rangers’ chances of coming out on top at Ibrox next week.

“He’s class isn’t he? He’s a wonderful football player,” McCoist said when asked about Ramsey. “It’s been highly documented that he’s struggled a little bit with injuries to keep him 100 per cent fit which is a great shame because we all want to see good players on the pitch and he’s certainly that.

“He’ll have a real bonus after scoring his first goal up in Dundee and I think he played the entire game [for Wales]. That’s a real positive in terms of his fitness and I’m very hopeful that he can get his feet up, have a rest and get himself ready for this Old Firm game because I want to see Aaron Ramsey playing in that.”