How to watch Georgia vs Alabama National Championship game 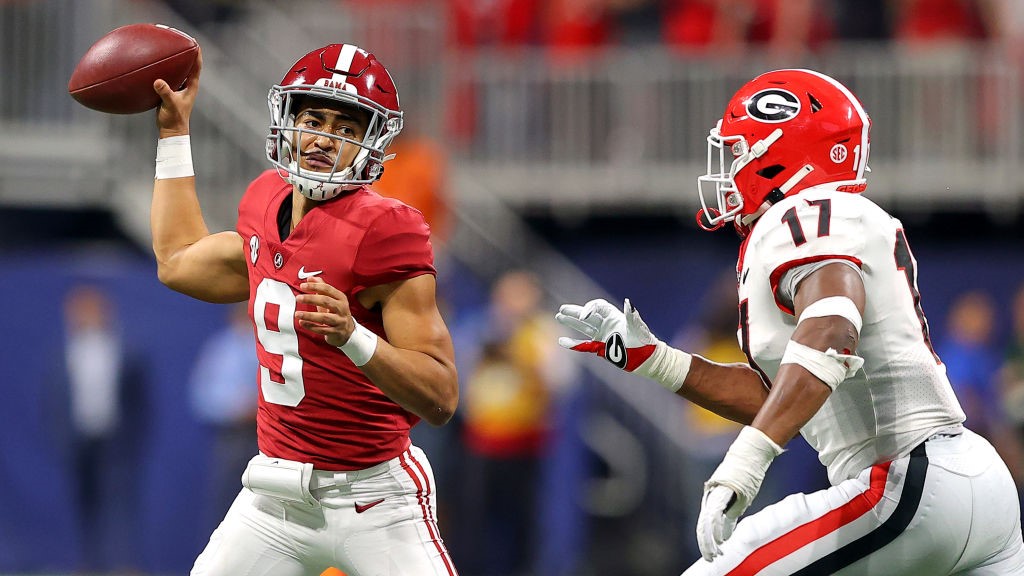 This is the second-time that the SEC rivals the Georgia Bulldogs and the Alabama Crimson Tide are meeting in the College Football Playoff championship game, with the two schools previously facing off in 2017 when Alabama bested Georgia in a classic game decided in overtime. Can we get another good game with this year’s title game matchup?

You’ll have to tune in on Monday, Jan. 10, to find out. Here’s everything you need to know about watching the game from anywhere:

The National Championship game between Georgia and Alabama will be broadcast on ESPN, but that is only one component of what the sports network has planned for its “MegaCast” of the game.

In addition to the main broadcast on ESPN with Chris Fowler, Kirk Herbstreit, Holly Rowe and Molly McGrath, ESPN 2 will feature Texas A&M head coach Jimbo Fisher leading what ESPN is leading the “Film Room,” where he and his coaching staff will analyze the game with ESPN college football analyst Dusty Dvoracek. ESPNU will host the “Command Center,” which offers up to four different vantage points at once from the ESPN broadcast’s 100 cameras. ESPNews will have the AT&T 5G SkyCast, showing the game in the popular SkyCam view (available in 4K on Comcast, DirecTV, YouTube TV and Verizon). There will also be a Spanish-language broadcast available on ESPN Deportes and Georgia and Alabama hometown radio broadcasts of the games available on the SEC Network and the ESPN app. Also streaming live during the game on the ESPN app will be the All-22 view of the game (replicating the vantage points teams use to study film) and exclusive views of the schools’ marching bands’ halftime performances.

The key to watching any or all of that coverage is of course to have access to ESPN, and its subsequent channels. ESPN is a cable network that is available on just about every traditional cable/satellite pay-TV provider, while also being available on all of the major live TV streaming services, including FuboTV, Hulu with Live TV, Sling TV and YouTube TV. All of the coverage being provided through the ESPN app is available to anyone who is signed up for ESPN through any of these above methods.

Despite the MegaCast push by ESPN, the 2022 College Football Playoff National Championship game will not be available to stream on ESPN Plus.

BT Sport has been carrying select college football games for U.K. viewers all season, and they will continue to do so for the 2022 College Football Playoffs National Championship game.

If the Georgia vs Alabama National Championship game is not immediately available to you through these above methods, a virtual private network, or VPN, is a good option to check out if you want to be sure to tune in.

A VPN is designed to route network traffic through a specific set of servers in a specific country, allowing viewers to watch content on an encrypted feed over a computer.

We rate ExpressVPN as a reliable VPN service for securing your data and accessing shows and events all around the world. Even better, ExpressVPN offers a 30-day no-quibble, money-back guarantee if you’re not happy with the service.

Now that you know how to watch the 2022 College Football Playoff National Championship game, here’s a quick preview of the matchup between Georgia vs Alabama, a rematch of the SEC Championship game that saw Alabama rout Georgia, 41-24.

Georgia has been the best defensive team in college football all season long. They allow just 253.1 yards per game and, even with the 41 points that Alabama hung on them in the SEC Championship game, they have allowed just 9.64 points per game all season. The question will be can Georgia figure out how to stop Alabama’s Heisman-winning quarterback Bryce Young this time.

Few have this season. Young won the Heisman Trophy (best college football player) and has thrown for 4,503 yards, 46 touchdowns and just five interceptions all season. It’s not just young, however, as running back Brian Robinson has amassed 1,275 yards on the ground this season, including a monstrous 204 yard game in the CFP semifinals against Cincinnati.

There are two key factors that will greatly determine the national championship. One is how key injuries will impact Alabama. The Crimson Tide will be without one of their star wide receivers in John Metchie, while the offensive line could be without two of its starters (Emil Ekiyor and Chris Owens); the Alabama defense could also be without a pair of cornerbacks, Josh Jobe and Jayln Armour-Davis. Will Alabama’s depth be able to fill the gaps left by these players or will Georgia be able to take advantage of their absences?

The other big question is the play of Georgia quarterback Stetson Bennett. Despite throwing for 27 touchdowns this season, Georgia’s offense is not meant to be a high-flying passing affair; it’s best working with a lead and leaning on the running game. However, Alabama forced Bennett to beat them in the SEC Championship game and he struggled. Can the Georgia quarterback play at a level that can get his team over the hump and beat Alabama?

Georgia is a 2.5 point favorite for the national championship.

Jan 22, 2022 admin
We use cookies on our website to give you the most relevant experience by remembering your preferences and repeat visits. By clicking “Accept All”, you consent to the use of ALL the cookies. However, you may visit "Cookie Settings" to provide a controlled consent.
Cookie SettingsAccept All
Manage consent