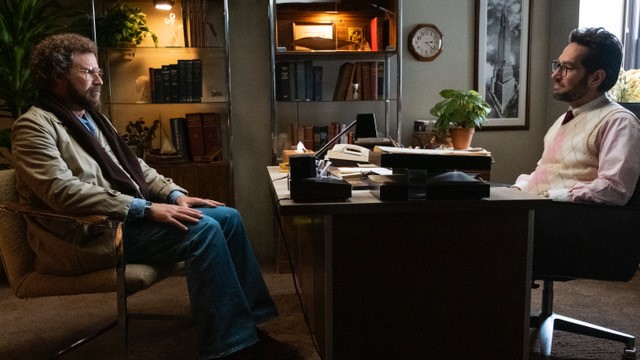 Based on a podcast about a shocking and bizarre real-life case, the intriguing new Apple TV Plus series The Shrink Next Door stars Will Ferrell as patient Marty Markowicz and Paul Rudd as his psychiatrist, Dr. Ike Herschkopf.

Marty, a gentle soul who suffers panic attacks and is bullied by his ex-girlfriend, is sent to see a shrink by his concerned sister. Their first session is unconventional — they end up playing basketball — and there are a few warning signs that all is not quite right, but Herschkopf does appear to get results. However, as the opening sequences of the first episode tease, their relationship is destined to take a dramatic turn.

Here, comedy stars Ferrell and Rudd give their take on a tale that’s so extraordinary, it could only be true…

How would you describe ‘The Shrink Next Door’ ?

Paul Rudd: “The story is primarily about the relationship between these two guys and how over the course of almost 30 years, their relationship changes, shifts and grows.”

Will Ferrell: “It’s very humorous at times. It’s outlandish when it comes to the things that these two characters do with, and to, each other. Yet it’s also heart-breaking, and all of that really appealed to me.”

How does the relationship between Marty and Dr Ike Herschkopf unfold?

Paul Rudd: “It really gets into betrayal, morality and manipulation, and what is and isn’t ethical. I think it actually talks about how easily our minds are manipulated.”

Will Ferrell: “It was a perfect storm of all these things happening, and when Ike came along, at the beginning he was a knight in shining armour. As you dig in deeper, you realise that anyone who’s feeling vulnerable, at any moment, could go down this road. For the first time there is this champion in their life that’s really supporting them in a way that they’d never been supported.”

The series is scripted by British writer Georgia Pritchett. What did she bring to the project?

Will Ferrell: “Georgia was somehow able to distil all the episodes of the podcast [that the series is based on] into eight episodes of this series, and cover the span of 27 years in such a great way. She and her staff have written not only funny but really heart-wrenching episodes. To do that balancing act is very impressive.”

Paul Rudd: “Everybody felt we were in such good hands, and we were fortunate that we could get somebody as bright and talented as Georgia.”

The Shrink Next Door will premiere on Friday Nov. 12.