How to watch Crawford vs Porter fight 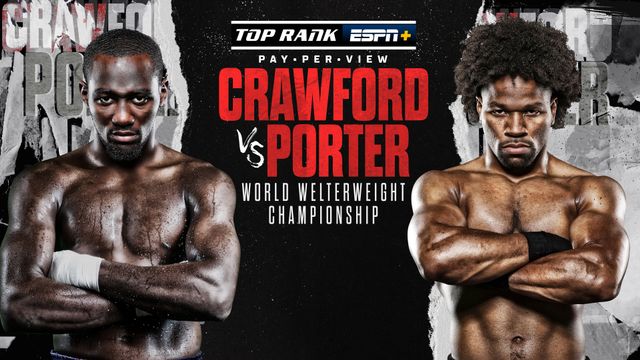 Two of the best welterweight boxers in the world face off this weekend as WBO World Welterweight champion Terence “Bud Crawford puts his title on the line against former two-time champion Shawn “Showtime” Porter. Crawford vs Porter is a massive fight between, so sports fans will want to learn the best ways to watch this bout live stream online.

Read on to find out how you can watch Crawford vs. Porter from anywhere, as well as a preview of the main event championship fight between Crawford and Porter.

How to watch Crawford vs Porter in the U.S.

U.S. sports fans who want to watch Crawford vs Porter will first need ESPN Plus in order to buy this pay-per-view. The fight is exclusive to ESPN Plus and can’t be purchased in the U.S. on any cable, satellite or other streaming service.

Beyond Top Rank boxing events like this one, ESPN Plus has all kinds of live sports including UFC, NHL, college football, Bundesliga, La Liga and much more. The service also features sports highlights, analysis and unique original programming.

How to watch Carwford vs Porter in the U.K.

In the U.K., Crawford vs Porter is available on Sky Sports, which can be watched on many U.K. cable systems. It can also be streamed online with a Now TV Sky Sports Pass. Coverage begins at 2 a.m. local time and the Main Event should start approximately 4 a.m. local time.

How to watch Crawford vs Porter from anywhere in the world

Of course if none of these methods for watching the Crawford vs Porter are available for you, then a virtual private network (or VPN) is a good option. A VPN allows you to route all of your internet traffic through a specific set of servers in a specific country. The one caveat here is that you need to be able to trust your VPN provider, because all of your traffic — encrypted as well as unencrypted — is going to be going through that VPN. For that, we’ve long been fans of ExpressVPN.

Terence “Bud” Crawford (37-0) is the WBO welterweight world champion, regularly ranked as one of the top five pound-for-pound boxers in the world. However, Crawford hasn’t been considered among the greats because he hasn’t been able to land a big fight against another truly great fighter.

For years, experts, fans and boxers have waited for an epic fight between Crawford and Errol Spence Jr., the current IBF and WBC unified welterweight world champion, but they’ve never agreed to it. While Crawford has looked impressive against the likes of Kell Brook and Amir Khan, none have presented enough of a challenge to truly measure him against. Faces a two-time champion who took his rival Spence to the limit, Crawford may finally have a chance to showcase his talent.

Shawn “Showtime” Porter (31-3-1) is an exciting challenger, a previous welterweight champion from 2013-2014 and again from 2018-2019. He is also the second ranked challenger in his class as rated by the WBO. This fight is a chance to build his legacy with a third reign as champion. Porter is no stranger to the spotlight, having fought in several huge PPV main events.

His most recent major fight was his bout with Errol Spence Jr. in September 2019. Used his aggressive pressure style, he pushed Spence further than anyone else had, leading to the only split decision of Spence’ career. Porter should be more than a measuring stick for Crawford, but instead a real threat to take his title and spoil his undefeated record.

Terence Crawford is a heavy favorite to win this fight at -750 odds.

Here is the complete fight schedule for Crawford vs Porter: