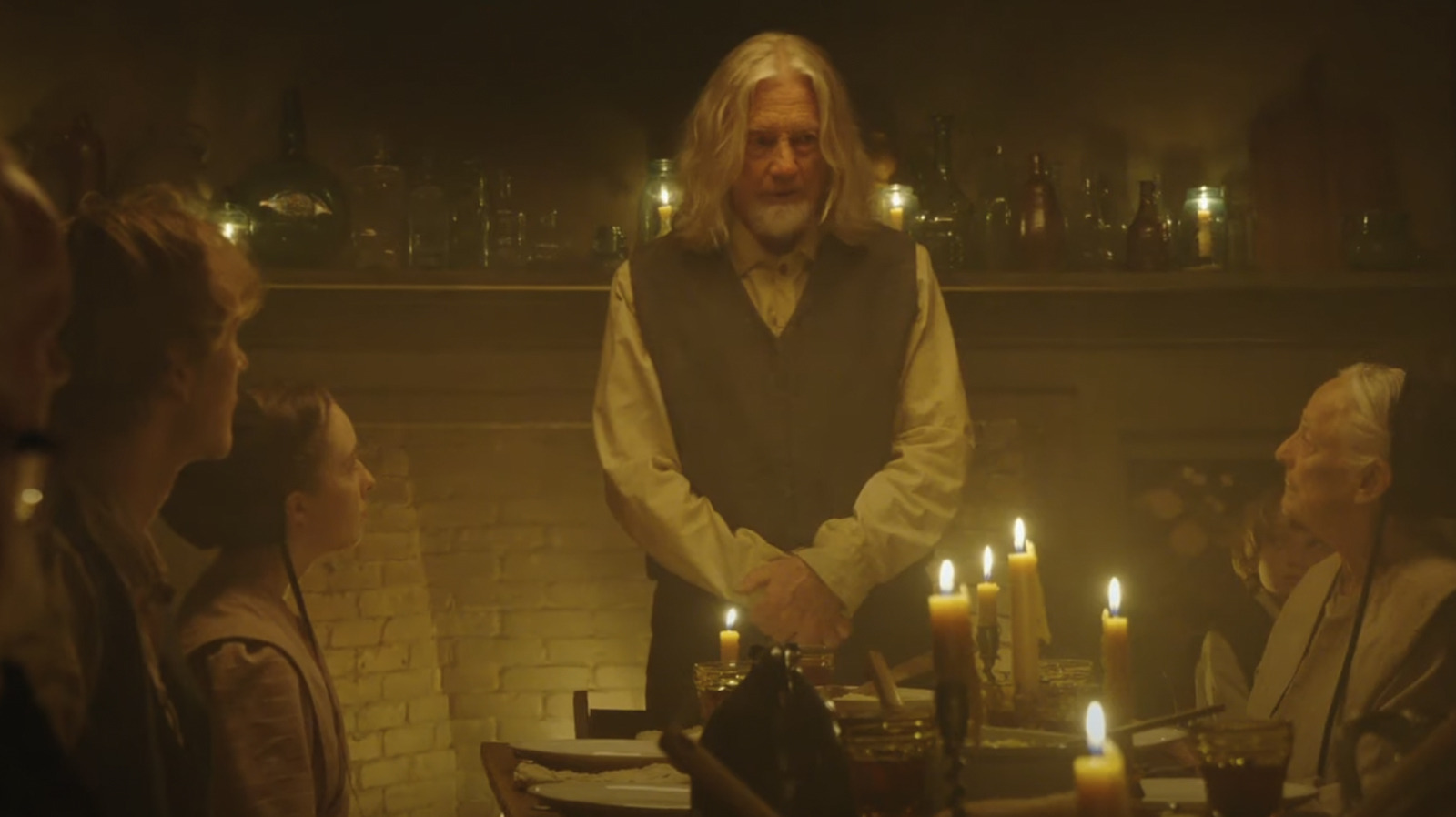 Eubank introduces slow-motion cinematography, drones and majorly upgraded lenses as a visual signature. Yet, it doesn’t truly feel like a Paranormal Activity film outside the primary usage of found footage.

Emily Bader stars as an Amish descendant, Margot, dropped at a hospital’s doorstep in infancy. Margot connects with her relative Samuel (Henry Ayres-Brown), who allows her, Chris (Roland Buck III) and sound technician Dale (Dan Lippert) into his family’s remote farmland to film a first-time-meetup documentary. Patriarch Jacob (Tom Nowicki) permits outsiders with cameras into his domain despite typical rules against such acts, and everything seems rustic but regular. Then craziness ensues when Jacob’s congregation reveals themselves and ritualistic horrors start to unfold. That’s the long and short of things, all in the name of a new demon named Asmodeus.

When I say Paranormal Activity: Next Of Kin doesn’t feel like a Paranormal Activity movie, I mean that scares aren’t as regular an occurrence. My biggest compliment to the entire franchise is how even at its worst, filmmakers can accentuate the intimacy of fear that’s in your face. I’d love to say the same about Paranormal Activity: Next Of Kin, but it’s just not true. Eubank’s usage of claustrophobic aquatic cinematography and tight frames in Underwater doesn’t lend itself to found footage fears in this instance, as there are few frights worth much of a holler. Asmodeus is no Toby, which becomes evident in how Asmodeus relies on being seen to terrify — Toby’s invisible haunted house trademarks are abandoned and missed.

Landon recalls cult found footage flicks like The Sacrament and religious horror like [REC] 2, but there’s a lacking intensity. When text cards read “March 2nd” and such, we prepare for the franchise’s invasive and nightmarish scares to take hold. Instead, Margot wanders around a creaky Amish homestead or dangerously designed barn without much commotion. There’s nothing remotely as traumatizing as Katie standing over the bed in Paranormal Activity or the rotating kitchen camera in Paranormal Activity 3, and the [REC] 2 comparison should describe the type of frights the film attempts to unleash.

It’s more creature forward, but even at that, misses the ferociousness of 2016’s similar Blair Witch finale with its fleeing characters and pursuing entity. It’s all so underwhelming in terms of horror, as snow flurries blur the camera and underground tunnels become a point of exploration.

It’s so curious because Paranormal Activity: Next Of Kin seems to be constantly fighting its connections to Paranormal Activity, which wouldn’t matter if that’s the film’s biggest fault. Eubank’s implementation of slow-motion during acts of both innocence and violence looks well and polished, but why does it exist in a found footage film? Cinematography is at odds with its concept, as musical cues and technological flourishes distract from what should be Margot’s horror story. Overhead drone shots that make treetops look like a kaleidoscope pattern are quite awe-striking, but there’s no explanation as to why or how such portraits are edited into the film we’re watching (if we’re invested in the found footage package). What excitement does occur is assuredly competent and performers sell their highlights, from Dale’s comedic relief while trying on Amish garb to Margot’s panic the one time her demon comes calling; it’s just unfortunately minimal.

Paranormal Activity: Next Of Kin could be described as a self-hating found footage film, and that’s a shame. William Eubank brings a certain pizazz that doesn’t quite fit the franchise, as it feels more cinematic than it should. Its scares are serviceable at best and unenthusiastic at worst — something I don’t think I’ve ever written about a Paranormal Activity movie.

Paranormal Activity: Next of Kin is now available to stream exclusively on Paramount Plus.