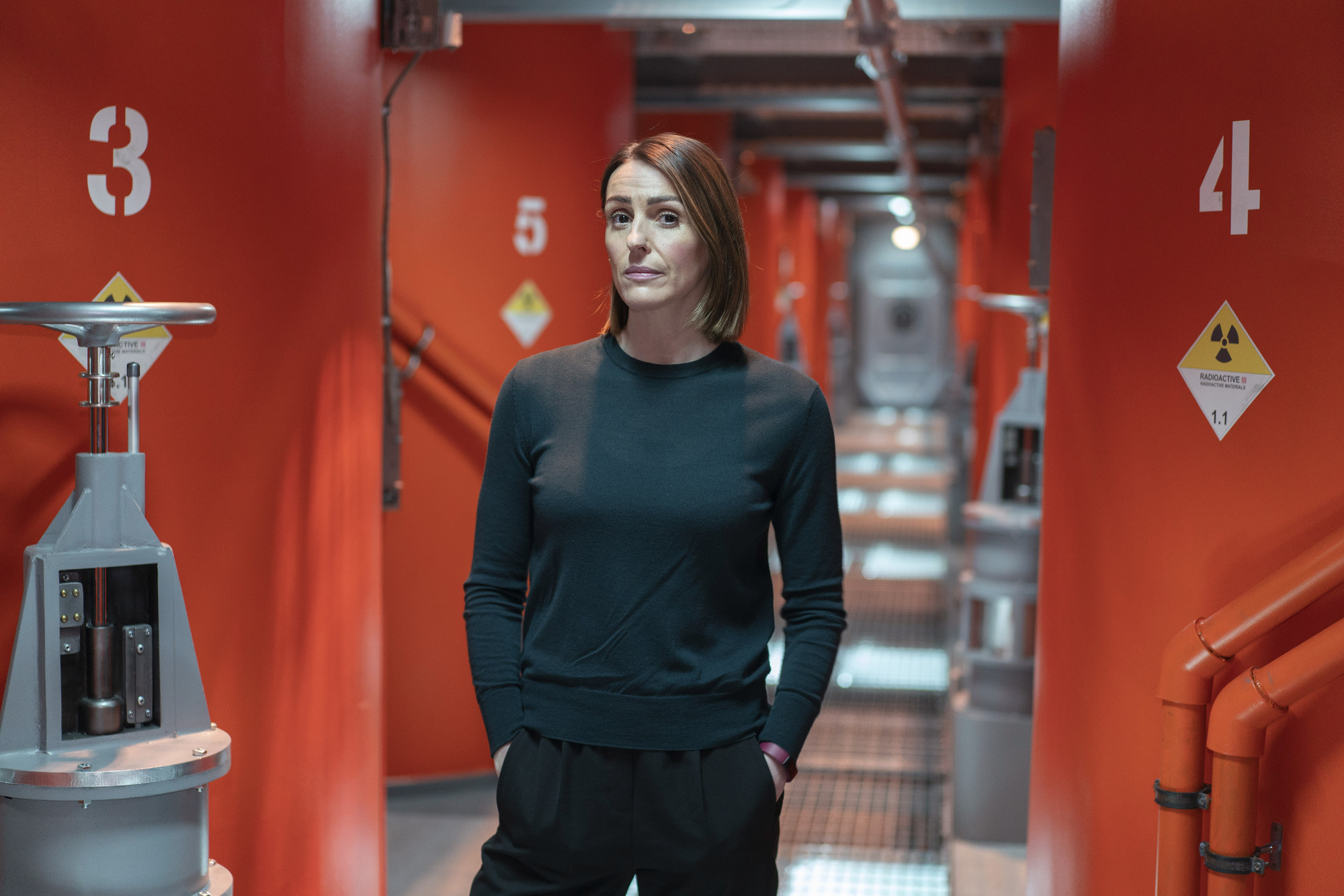 Vigil fans were left completely engrossed by Episode 4 last night as more dramatic discoveries were uncovered. But, the intense cliffhanger ending was what stunned viewers and left them impatiently waiting for the next episode.

As the show began to end, another crewmate met their gruesome end… Petty Officer Jackie Hamilton (Anita Vettesse), who was also the submarine’s chef. As DCI Amy Silva (Suranne Jones) shockingly stumbled across her body, a mysterious person wearing a gas mask charged towards her and tackled her to the ground, which left viewers coming up with their own theories as to who the masked attacker could be. Were they trying to save her? Or is DCI Silva about to fall victim to another attack?

While DCI Silva is eating breakfast, her attention is averted to Jackie when she overheard her talking about her son “getting out” and will be back home waiting for her. However, Jackie appeared to be nervous when she glanced over to DCI Silva.

DCI Silva is soon summoned for medical testing by Docherty (Anjli Mohindra) and informs the Captain (Paterson Joseph) that she may be having withdrawal symptoms from not taking her medication and therefore is in no fit state to do her job. The Captain believes this and a furious DCI Silva brings up the Port Havers incident, much to the dismay of the Captain, who then confines her to her quarters.

Meanwhile, more astonishing evidence was being discovered on-land, including a Russian spy, MI5 secrets, an American submarine tracking Vigil for an unknown reason, and a request for HMS Vigil to return to port immediately.

Later on, Jackie turned up to her quarters to give DCI Silva some food, which is when DCI Silva decided to question her about her son. “He made some bad choices. Teenage stuff. Got in some bother,” Jackie said. Despite showing that she understood her situation and that kids can make mistakes, DCI Silva had no luck in getting any answers from her as Jackie quickly cut in, “Sorry, love, I shouldnae be talking to you. I’ve left some extra pudding to cheer you up,” and rushed off.

This was enough to raise suspicion for DCI Silva and when Lt Commander Mark Prentice (Adam James) was searching for the Captain and instead found DCI Silva, she admitted that she doesn’t trust the Captain and that Prentice is the only one she can trust. She began to ask him more questions about Jackie’s son and Prentice revealed that her son was in prison in Indonesia on drug charges and is getting released one year into a ten-year prison sentence. DCI Silva explained that it’s strange that her son is being released just like that and that it doesn’t make sense.

When DCI Silva confronted the Captain with her evidence, Jackie was summoned to the control room for questioning as a potential suspect in the murder of Craig Burke. Although Coxswain Glover (Shaun Evans) seemed concerned about Silva’s interest in speaking to Jackie and resulted in him turning back and rushing off somewhere else.

After five minutes of Jackie being a no-show, DCI Silva became increasingly worried and went off to find her, which is when she found the horrific discovery of Jackie lying dead.

She was then taken aback by a figure wearing a gas mask charging at her at a high speed and then tackling her to the ground.

Was Amy being attacked or saved at the end? Looked like the chef had been poisoned, so was that the coxswain in a gas mask saving her? #VigilSeptember 12, 2021

Bloody loving #Vigil . I’m pretty sure whoever was in the mask was saving Amy, but so many sub plots! Beautifully acted all round, can’t wait for next week!September 12, 2021

So… #Vigil… here’s my theory. The coxsn was wearing the mask & was running at Amy to get her away from the door because I reckon some type of Gas killed the cook & I don’t think he’s the Russian mole. I reckon he does know more than he’s letting in though. pic.twitter.com/ZBE98G0StRSeptember 12, 2021

Is Coxswain Glover going to kill DCI Silva or was he trying to save her by pushing her out of the way with his gas mask on. Why did he go looking for Jackie? He seemed very concerned when she was being ordered to go to the control room onboard #Vigil Can’t wait til next weekSeptember 12, 2021

Okay I think gas mask fella is not a baddie. Chef inhaled gas and died (gas leak obvs) and gas mask man has come to save Amy. #VigilSeptember 12, 2021

I think the Cox’n is innocent. He ran into Amy wearing the gas mask to try and save her life as the cook has also been poisoned. #vigil #bbcvigilSeptember 12, 2021

In #vigil at the end I think the cox’n has worked it out and was rushing in with his gas mask on to save her, (the police officer), not attack her….September 12, 2021

Vigil just keeps getting better. I’m convinced it’s not the Coxon behind the mask. It’s far too early for there not to be at least another couple of twists. Just wish it was sooner than next Sunday for them to come. #VigilSeptember 12, 2021

I think the man in the gas mask is actually saving her. Some sort of gas in the air has killed the cook in my opinion and he’s saving her #VigilSeptember 12, 2021

Pretty sure that’s a woman at the end in the gas mask #Vigil #poison?September 12, 2021