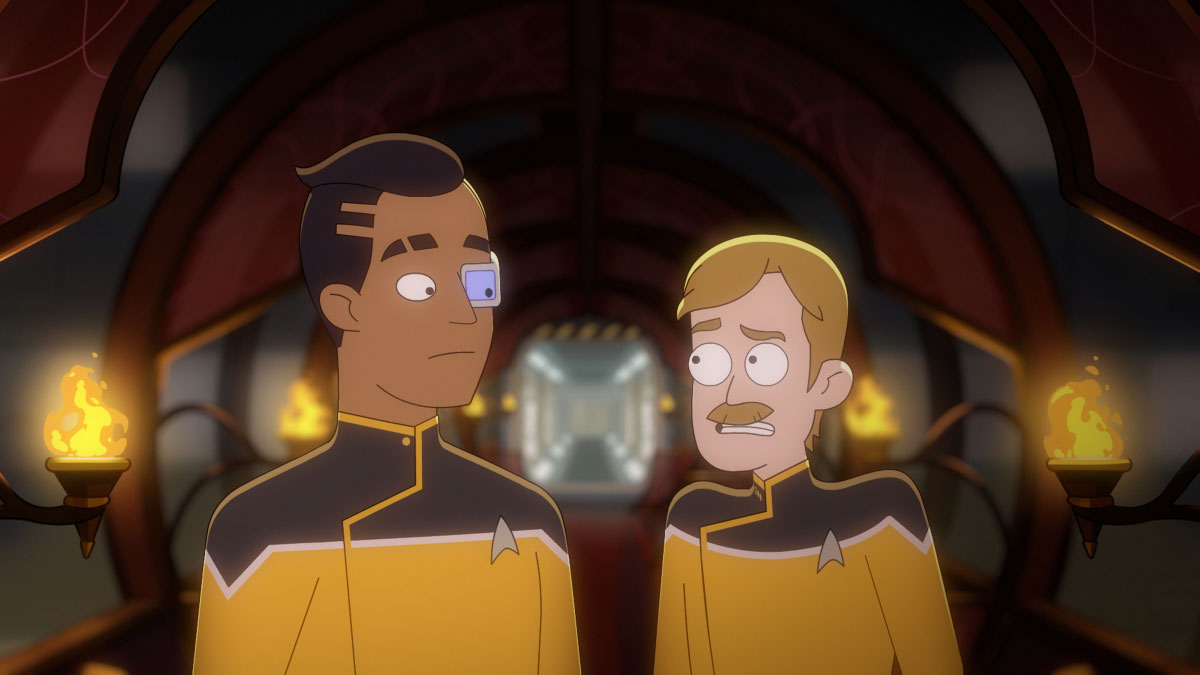 Paul Scheer is a comedian whom you might expect to be cast in a show like Star Trek: Lower Decks, but you’d expect him to be cast as a more integral character than Lt. Commander Andy Billups has been throughout the tenure of this show. It may have taken most of two seasons, but Billups finally gets to share the spotlight in “Where Pleasant Fountains Lie” with an absolutely bizarre backstory that establishes Billups as something of an asexual icon. Who knew?

The episode finds the crew of the Cerritos answering a distress call from a ship populated by humans from a planet that was colonized to be a medieval kingdom. Their queen is aboard the vessel, and she turns out to be Billups’ mother, disapproving of Billups’ abdication of the throne in favor of pursuing technical sciences in Starfleet, yet apparently needing his help in an hour of need as their ship’s engine has stalled. The weirdest wrinkle, however, is that the queen has a history of trying to trick Billups into losing his virginity, which by some quirk of their regal custom would force Billups to ascend to the throne.

This is such a buckwild premise that it’s a little bit disappointing that the episode plays out more or less exactly how you would expect, beat for beat. There’s ostensibly a subplot in here about Rutherford (Eugene Cordero) learning to take risks and Tendi (Noël Wells) coming to grips with how encouraging Rutherford to take risks can put him in life-threatening peril, but they mostly feel like tagalongs to Billups’ deception at his mother’s hand as she fakes her own death, forcing Billups to seriously consider doing the do with her horny bodyguards. It’s a story that is more conceptually funny than laugh-worthy, but it does present a unique opportunity to tell a story about a character who is completely disinterested in sex and the society that compulsively insists that he must. Honestly, that’s the kind of narrative that would fit right at home in a live-action Trek, and it wouldn’t have had to be couched in situational irony to work. It still works here, but it really should have either leaned fully into farce or fully into ace-spectrum allegory.

The other half of the episode finds Boimler (Jack Quaid) and Mariner (Tawny Newsome) stranded on a deserted planet with their cargo of a rogue evil AI cube (Jeffrey Combs). Stuck with a replicator that only produces dry black licorice, the duo finds themselves at each other’s throats, reopening old wounds about Mariner lacking confidence in Boimler’s abilities while Boimler desperately wants to demonstrate his improved competence from his time away on the Titan. From a comedic standpoint, there isn’t much on display here besides a running gag where the AI constantly demands to be plugged into devices to assist them, despite obviously intending to betray them because, you know, evil. This does make a fine impetus, though, for a genuine question of how much of Boimler’s growth Mariner will accept before she begins to feel like her role as self-appointed mentor becomes overshadowed.

The episode ends without really addressing the underlying issue of their relationship through more than implication, and that’s actually a pretty good summary of the episode overall. There’s a lot of potential in “Where Pleasant Fountains Lie,” both comedic and dramatic, but it feels disserved by either episode runtime or split attentions – probably both. What is there is still a solid episode of television, better food for thought than a stick of black licorice, but not as filling as you’d wish.