‘Nightmare Alley’: Trailer, release date and everything we know about the Bradley Cooper movie 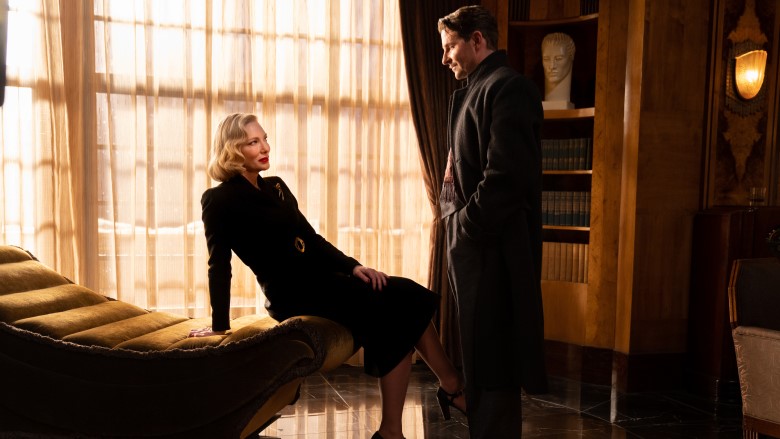 Despite being a fantastic title, Nightmare Alley doesn’t immediately conjure up audience recognition like other upcoming 2021 movies, including Spider-Man: No Way Home, The Matrix Resurrections or West Side Story; but with those involved in the film it is likely to grab people’s attention.

Nightmare Alley is the latest film from Oscar-winning director Guillermo del Toro, with the backing of Searchlight Pictures. Throw in the all-star ensemble and Nightmare Alley will be one of the more intriguing options available to movie lovers for the rest of 2021.

Here is everything that we know about Nightmare Alley.

What is the plot  of ‘Nightmare Alley’?

Nightmare Alley is a remake of a 1947 movie of the same name starring Tyron Power and Joan Blondell. The story tracks the rise and fall of Stanton Carlisle, a mentalist who starts his career as a carny before moving on to bigger things, only to have it all come crumbling down.

It is certainly not one of the most recognizable film noirs, but it’s little surprise that a film historian like del Toro has such a passion for it that he is remaking it.

Here is the official synopsis for del Toro’s Nightmare Alley from Searchlight Pictures:

“An ambitious carny with a talent for manipulating people with a few well-chosen words hooks up with a female psychiatrist who is even more dangerous than he is.”

Who is in the ‘Nightmare Alley’ cast?

The ensemble for Nightmare Alley is quite the impressive one, headlined by Bradley Cooper. Cooper will take on the role of Stanton Carlisle that was originally played by Tyrone Power. Sharing top billing with Cooper is Cate Blanchett as Lilith Ritter, the psychiatrist that Carlisle eventually pairs up with.

Here is the full cast and their characters:

If you are not immediately familiar with director Guillermo del Toro, you likely are at least aware of some of his films, which are some of the more imaginative and impressively made movies of the last 20 years.

Breaking into Hollywood with Blade II and Hellboy, del Toro took off with the fantasy film Pan’s Labyrinth before going on to make the blockbuster Pacific Rim and the horror film Crimson Peak.

His last film was The Shape of Water, the director’s loving tribute to the classic movie monster from The Creature of the Black Lagoon, which won Best Picture and Best Director at the Oscars.

Nightmare Alley, which he wrote as well as directed, is the first film in four years from del Toro.

When is the ‘Nightmare Alley’ release date?

Nightmare Alley has been slated for a Dec. 17 release date, with it playing exclusively in theaters upon its release.

After the last year-and-a-half of the pandemic, many viewers have gotten accustomed to new films premiering first, or at least simultaneously, on a streaming/on-demand service. However, Hollywood is getting back to the exclusive theatrical window, albeit adjusted from what they were pre-pandemic.

Disney, which owns Searchlight Picture, announced that all of its remaining 2021 films would be getting 45-day exclusive runs in movie theaters before they become available digitally. So, don’t expect to be able to watch Nightmare Alley from home until at about February 2022.

Is there a ‘Nightmare Alley’ trailer?

The first trailer for Nightmare Alley was released on Sept. 16. It’s a teaser trailer, with Willem Dafoe’s character calling for carnival patrons to step right up to see his attraction and determine whether it is man or beast. All of this plays over some fantastic looking shots and set design, as well as giving just the smallest glimpses into the journey of Bradley Cooper’s Carlisle. Watch the teaser trailer below.