Kalashnikov will not return to the track for at least a year as trainer Amy Murphy gives her stable star time to recover from a tendon injury picked up at the Cheltenham Festival.

The eight-year-old, winner of the Grade One Devenish Manifesto Novices’ Chase at Aintree in 2019, was found to have an issue after finishing fourth in the Ryanair Chase in March.

Newmarket handler Murphy says a comeback run at one of the spring festivals could be feasible, but she is happy to wait to ensure Kalashnikov is fully fit for the 2022/23 season.

“Unfortunately, he picked up a tendon injury which was found after the Ryanair,” Murphy told Sky Sports Racing. “Even a week later you wouldn’t have known it looking at him, he was bucking and raring to go but unfortunately these things take time.

“We’re going to give him all the time in the world. There’s no point bringing him back this season as it would be a rush.

“We’re going to give him the full year and bring him back this time next year, all being well.

“It’s only 10 per cent the width of his tendon, it’s a tiny injury but sadly when you’re talking about tendons and ligaments, it’s always the same timeframe.

“We could get him back for March or April but it seems silly doing that for the sake of just one run.”

Murphy: We wait on horses hand and foot Murphy says National Racehorse Week is a great opportunity to show the general public how well racehorses are looked after away from the track.

Murphy is one of a number of trainers taking part in Newmarket’s Henry Cecil Open Weekend, as part of the first ever National Racehorse Week.

The initiative, the brainchild of fellow trainer Richard Phillips, was created to showcase the love and care racehorses receive.

“Anything we can do to show to the wider public just how well these horses are cared for and looked after can only help promote the sport,” Murphy said.

“We wait on them hand and foot, day and night. They absolutely want for nothing. 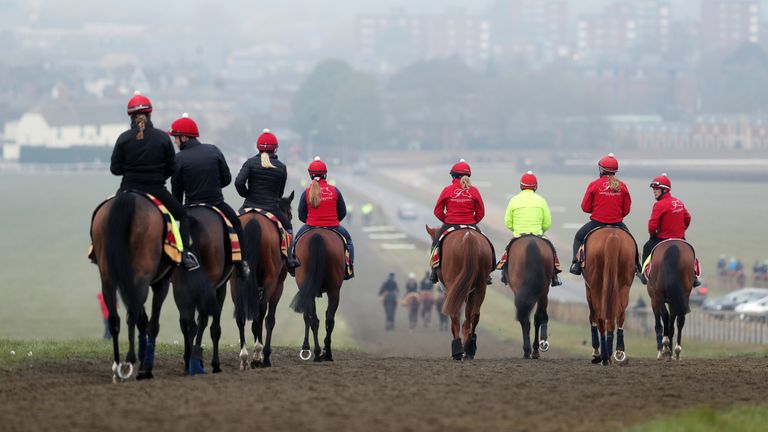 Trainer Richard Phillips, who is behind the creation of the National Racehorse Week, is hoping the stable open days help attract the next generation of jockeys and stable staff.

“It’s a case of educating people and promoting what a great job everybody does behind the scene.

“The more we can showcase what a great thing we have going on, the better it is for the wider population of horse racing.

“My horses all went to the beach last Friday for an afternoon out and they all get turned out in the paddocks every day. I think people have no idea that kind of thing happens.

“We went down to Holkham and took a few of the older horses that needed freshening up and some of the younger ones to get them on the horsebox.

“You never know going there how they’re going to react but it’s just brilliant to see them all chill out. They all went swimming in the sea and had a canter along the shore.

“They had a great day out and have had a real swagger about them this week because of it.”