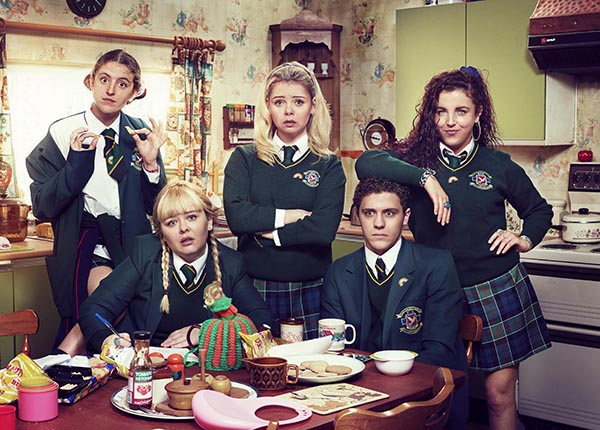 Derry Girls Season 3 is thought to be the final and quite possibly the funniest series of the hit C4 comedy.

The award-winning show follows a group of teenagers navigating parents, parties, and school in Derry during the 1990s against the backdrop of the Troubles.

Lisa McGee, the writer of Derry Girls, says: “I love writing this show and I’m so thrilled to be able to continue the Derry Girls story, thank you Channel 4, Erin, and the eejits live to fight another day!”

Jimmy Mulville, MD of Hat Trick Productions, adds: “We’ve been brilliantly supported by Channel 4 on the Derry Girls’ journey and I’m just thrilled we’re still on it and heading for series three.”

Here’s everything we know so far…

Meanwhile, in the US Derry Girls Season 3 will be heading for Netflix.

Who’s in the cast of Derry Girls Season 3?

All the main characters are set to return. So we will again catch up with Erin (Saoirse-Monica Jackson), her cousin Orla (Louisa Harland) and friends Clare (Nicola Coughlan), Michelle (Jamie-Lee O’Donnell), and Michelle’s tag along English cousin, aka The Wee English Fella, James (Dylan Llewellyn).

No plot information has been released yet but we expect more great 1990s music and plenty of teenage disasters.

Is Derry Girls Season 3 going to be the final series?

Although this hasn’t been confirmed it seems very likely that this will be the final series. After all, there’s only so long the cast can carry on playing teenagers! Saoirse-Monica Jackson is now 27, while co-star Jamie-Lee O’Donnell is 29. The pair hilariously teamed up recently on Celebrity Googlebox.

Not yet! Watch this space, hopefully, one will arrive soon!