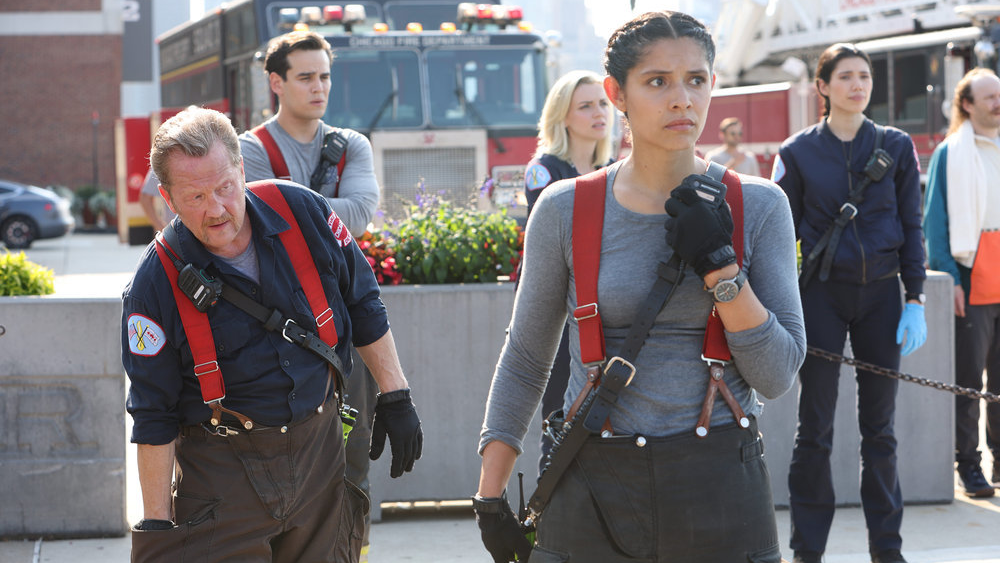 With New York and Los Angeles serving as the homes of countless TV procedurals, Chicago carved out its own niche on NBC, starting with Chicago Fire and followed up with Chicago P.D. and Chicago Med. But here, we’re talking about the original, Chicago Fire.

Chicago Fire premiered on NBC in 2012 and was created by Michael Brandt and Derek Haas, who together wrote the screenplays for 2 Fast 2 Furious, 3:10 to Yuma and Wanted. Chicago Fire was their first foray into TV, and it’s been a good one as they have created their own franchise with its very own day in the NBC primetime lineup. The series is also executive produced by Law & Order creator Dick Wolf.

As Chicago Fire heads into its tenth season, here is everything you need to know about the drama series.

What is the plot of ‘Chicago Fire’?

Chicago Fire focuses on the professional and personal lives of the firefighters and paramedics at Chicago’s Firehouse 51. The series is generally episodic, with of course some storylines playing out across the season(s).

However, there was a massive cliffhanger in season nine that fans are dying to see what happens next with. SPOILER ALERT if you have not seen season nine, skip ahead to the next section!

In the season nine finale, Severide, Cruz, Capp and Tony are called to an underwater boat rescue, and as they attempt to swim the victim to safety, the boat collapses and traps them. With the water rising the episode faded to black, leaving fans to wait all this time to find out what happened.

Here is the official synopsis for the first episode of season 10, “Mayday”:

“Firehouse 51 deals with the aftermath of the capsized boat rescue. Gallo, Ritter and Violet discuss plans for a side gig.”

Who is in the ‘Chicago Fire’ cast?

Chicago Fire is an ensemble piece, with a troupe of actors portraying the team of firefighters and their friends and family. Here is a rundown of the main cast:

When is the ‘Chicago Fire’ premiere?

Chicago Fire will be back on TV with its tenth season on Wednesday, Sept. 22. NBC is dedicating its full Wednesday primetime lineup to the Chicago franchise, what the network was dubbed as “One Chicago Wednesday.”

Is there a ‘Chicago Fire’ season 10 trailer?

There isn’t a dedicated trailer for the new season of Chicago Fire, rather NBC has made a promo trailer that touts its entire One Chicago Wednesday lineup ahead of their Sept. 22 premieres. Check out the trailer below.

How to watch ‘Chicago Fire’

Chicago Fire airs live on local NBC channels. So if you have a traditional cable or satellite subscription, or have opted to go old school with a TV antenna, you can tune in for Chicago Fire for at its weekly time right on your TV.

The somewhat newer answer to traditional cable/satellite providers are live TV streaming services like Fubo TV, Hulu with Live TV, Sling TV and YouTube TV. All of these services offer access to a subscriber’s local NBC channel (Sling TV does only on its Sling TV Blue package).

Will there be a ‘Chicago Fire’ season 11?

NBC isn’t planning on pulling the plug on any of its Chicago-based series anytime soon. In February 2020 the network announced that it had renewed Chicago Fire, Chicago Med and Chicago P.D. for three seasons, which covered seasons nine, 10 and 11 for Chicago Fire, according to a report from Deadline.

The shows have been consistent hits on the network, so wouldn’t be surprised if another renewal is coming down the pipe closer to the end of season 10 for Chicago Fire, though nothing is known at this point.

Luther Movie Is Happening at Netflix with Idris Elba Returning

Tue Sep 14 , 2021
Share on Facebook Tweet it Share on Reddit Pin it The Luther movie is officially happening at Netflix. On Monday, the streamer announced that Luther will be coming back for an all-new movie with Idris Elba reprising the iconic role. He’ll be joined by Cynthia Erivo and Andy Serkis, though […]