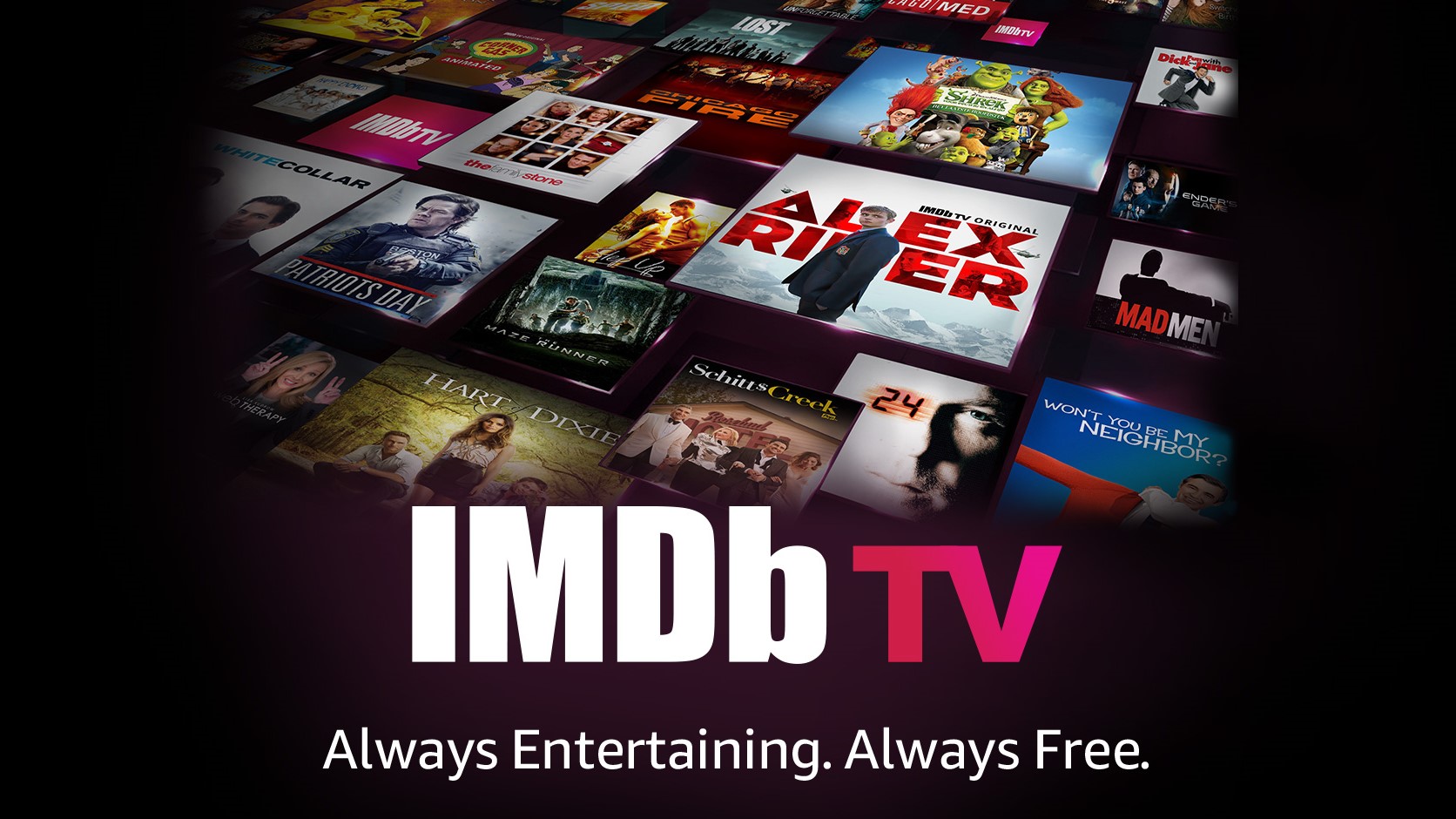 IMDb is home to practically all the movie information that you could ever want, and with IMDb TV you can now watch a bevy of the best movies and shows via the internet movie database, including some of the best comedies around.

IMDb TV is a free, ad-supported (AVOD) streaming service. All you need is to create a free IMDb account and you can start watching all of their available titles through the website or streaming platforms like Roku or Amazon Fire TV and other smart TVs.

Here’s a peek at some of the best comedies that are currently available on IMDb TV.

Steve Martin and Lily Tomlin are an iconic duo in All of Me, a body-inhabiting comedy directed by Carl Reiner. In it, a dying, selfish millionaire (Tomlin) attempts to have her soul transferred into the body of a younger woman, only for things to go very wrong and instead she winds up sharing the body of her lawyer (Martin).

The scenario gives Martin some great opportunities to perform physical comedy, while the verbal sparring between Tomlin and her co-star is fantastic. In fact, each of them were nominated for Golden Globes for their performances.

Both Martin and Tomlin were two of the biggest comedy stars of the 80s, but All of Me was the only time they worked together.

I remember when I saw American Hustle in theaters and couldn’t help but laugh right off the bat as Christian Bale, having physically transformed himself yet again, is putting together the most elaborate combover that you’ve ever seen. That’s where most of the humor lies in American Hustle, not broad jokes but the humorous ticks and interactions of David O. Russell’s characters, long a trait of the director.

Of course there are more broad strokes, offered mostly by Jennifer Lawrence’s performance (who just couldn’t help but put metal in the science oven, as she says). This helps her performance stand out, but Bale, Amy Adams, Bradley Cooper, Jeremy Renner and more are all great in the film dealing with big cons and government corruption.

Groups of people always find the movies and shows that speak to them, and that’s exactly what happened with Jamie Babbit’s But I’m a Cheerleader. Not loved by critics when released, the LGBTQ+ community, and others, have rediscovered it over the years and turned it into a cult classic.

The story follows a high school cheerleader who is sent to conversion therapy after her parents and friends begin to suspect that she is a lesbian. But I’m a Cheerleader stars an incredible cast featuring Natasha Lyonne, Clea DuVall, Cathy Moriarty, Michelle Williams, RuPaul and Melanie Lynskey.

It’s Pride month, so there’s no better time to watch great LGBTQ+ movies and shows on IMDb TV and other streaming platforms.

We all remember the board game Clue, but unfortunately less of us remember the movie Clue, which is a shame because it is delightfully wacky.

The movie is loosely based on the classic board game, as six guests (the classic characters Mrs. Peacock, Mrs. White, Professor Plum, Mr. Green, Colonel Mustard and Miss Scarlett) are invited to a mansion for dinner for mysterious reasons, after which they learn that their host has been killed and they attempt to solve the murder.

When it was released, Clue tried something different where it shot multiple endings and released them all in different theaters. Thankfully, now all of the endings can be watched back to back via streaming.

Eddie Murphy gave us the story of Rudy Ray Moore, who created the popular Dolemite character of Blaxplotation films in the 1970s, with Netflix’s Dolemite Is My Name, but you can see the original Dolemite for yourself on IMDb TV.

Moore stars as the titular Dolemite, who after being released from prison teams up with his all-girl army of kung fu warriors to take on the criminals and corrupt police officers that framed him. D’Urville Martin, Jerry Jones and Lady Reed co-star.

The New York Times described Dolemite as “The Citizen Kane of kung-fu pimpin’ movies.” With that kind of description how can you not want to watch?

Zach Braff’s Garden State is one of the first films that pops into mind when thinking about indie comedies from the early to mid 2000s. Braff, as writer, director and star, tells a slightly off beat story about an actor who returns home for his mom’s funeral and forms a connection with a spirited girl.

There are very few out and out jokes in Garden State, especially compared to Braff’s TV show Scrubs, but there’s plenty to laugh about as the story unfolds with great performances from Braff, Natalie Portman and Peter Sarsgaard, as well as cameos from Jean Smart, Jim Parsons and even Method Man.

If you think Aaron Sorkin’s characters talk fast, wait until you see Cary Grant and Rosalind Russell go a mile a minute in His Girl Friday.

Howard Hawks directed His Girl Friday, which sees Grant star as the editor of a newspaper who schemes to keep his ace reporter, and ex-wife (Russell), on staff instead of running off to remarry.

One of the all-time classic comedies should put to bed any complaints that old black-and-whtie movies are slow-paced and dull.

Inherent Vice, set in the 1970s, follows the pot-smoking private investigator Doc Sportello as he looks into the disappearance of his former girlfriend. Phoenix portrays Doc and stumbles his way through the case with funny interactions with the rest of the cast.

It’s the closest to straight comedy that Paul Thomas Anderson has ever done.

Seth Rogen and Charlize Theron as the lead couple in a romantic comedy? As strange on the surface as it may seem, the Long Shot proved that it was a brilliant pairing and wound up being a very pleasant surprise when it was released.

Theron plays the Secretary of State who is getting ready to make a run for president. For this she hires a speech writer, an old childhood friend (Rogen) that also had a major crush on her. Theron and Rogen have great chemistry that instantly has you laughing with them and rooting for their relationship to work.

A 1930s comedy is a genre almost entirely to itself, and My Man Godfrey is a classic example of it at the height of its powers, with William Powell and Carole Lombard as the classic pairing leading the way.

My Man Godfrey follows a ditzy socialite who hires a vagrant from off the street to be her family’s new butler. However, as they all quickly learn, there’s more to Godfrey than what they initially assumed.

Boy meets girl. Boy likes girl. Boy forms a band to try and impress girl. Boy’s band actually rocks. That’s the basics of what you need to know about Sing Street, John Carney’s Irish-set ode to the music of the ‘80s. Of course there’s plenty more to dig into in this charming and humorous gem.

While the music and love story (including the connection between the lead character and his brother) is the meat of the film, the dynamic between the teenage wannabe rockers is fantastic fun that adds to the overall enjoyment of the film.

Quirky British indie film is a pretty well-established genre at this point. Richard Ayoade’s entry into it, Submarine, is one that is definitely worth checking out.

Following teenager Oliver Tate, Submarine has Oliver striving toward two objective’s, being a perfect boyfriend to his new girlfriend Joanna, and preventing anything from happening between his mother and an ex-lover who’s moved into the neighborhood.

Craig Roberts stars as Oliver, with Sally Hawkins, Paddy Considine, Noah Taylor and Yasmin Paige in support. There’s also a young Gemma Chan in the film if you can spot her.

We’ve already talked about Dolemite earlier on this list, which certainly has a spiritual connection with Undercover Brother, a funny update/spoof of the Blaxploitation film.

Eddie Griffith stars as the hip super spy Undercover Brother, who teams up with a secret agency that is in a constant struggle with “The Man,” the mysterious figure trying to keep minorities down. Joining Undercover Brother on the mission are characters starring Aunjanue Ellis, Dave Chappelle, Chi McBride, Gary Anthony Williams, Neil Patrick Harris, Denise Richards, with Chris Kattan and Billy Dee Williams also starring.

Undercover Brother’s broad but pointed comedy makes it enjoyable for all.

Fri Sep 10 , 2021
Share on Facebook Tweet it Share on Reddit Pin it The world of Far Cry 6 is already set to be one of the most unique and chaotic locations that Ubisoft has ever made, but the post-launch plans for the game make it sound even crazier. RELATED: Far Cry 6 Overview […]