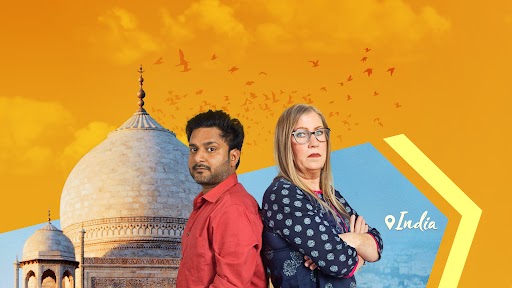 ’90 Day Fiancé: The Other Way’ Season 3 is here and fans are in for a treat as the 90 Day Fiancé franchise continues to grow from strength to strength.

The original 90 Day Fiancé follows couples who have applied for or received a K-1 visa, which is available to foreign fiancés of US citizens. In the series, non-American women must decide whether to get married within 90 days or break things off and return home.

Fans of the show will already know that there are a whopping 16 spin-offs from the series, including 90 Day Fiancé: Happily Ever After and 90 Day Fiancé: Before the 90 Days and now Season 3 of 90 Day Fiancé: The Other Way has reached TLC to follow even more couples and their relationships.

Season 3 of 90 Day Fiancé: The Other Way started on August 29 on TLC, and can be watched on-demand via Discovery+ in the UK.

You can also catch up on past seasons of 90 Day Fiancé by streaming on Discovery+ or you can buy individual episodes of whole seasons on Amazon Prime.

What happens in 90 Day Fiancé: The Other Way Season 3?

90 Day Fiancé: The Other Way follows couples where the American partner marries their partner abroad and moves to their country, instead of the two residing in the US together like the original series. This provides an interesting look at how US citizens get on living in another country.

The new season gives fans the chance to see how their favourite couples from past seasons are getting on, as well as introduce them to new faces who are joining the line up. In total there will be six couples appearing in 90 Day Fiancé: The Other Way Season 3.

New couple Steven and Alina will be joining the show, as well as Ellie and Victor. Returning couples include Jenny and Sumi, Corey and Evelin as well as Kenneth and Armando.

Which couples will star in 90 Day Fiance: The Other Way Season 3?

Steven is giving up his life as a devout Mormon in Utah to be with Alina, his Russian girlfriend, who he met on a language app a year ago. But when the coronavirus pandemic sends their marriage plans into a spin, the pair are forced to rethink their nuptials. To add to their troubles, Alina is suspicious when it seems Steven has been keeping secrets from his past…

Two years after meeting Victor on a trip to South America, Ellie is planning to pack up her life in the US where she runs a successful restaurant business to make a fresh start with the man she loves on a tiny Columbian island. But before they’re reunited, a huge hurricane hits Victor’s island, causing Ellie to lose contact with him…

Kenny has moved to Mexico and proposed to Armando and it’s not long before the wedding plans get underway. However, not only are the couple on different pages when it comes to what sort of wedding they want, but they also discover they might not see eye to eye when it comes to having a family together…

Season three will revisit Jenny and Sumit’s relationship and with Jenny now a year into living in India, it seems there is still no wedding on the horizon. With the end of her visa looming, Jenny isn’t happy that they’re still not married, while Sumit is still determined to get his parents’ approval for the marriage. Soon Sumit’s mother comes up with a surprising solution…

It has been eight months since Ari and Bini welcomed their son, Avi, into the world but their happiness soon hits the rocks when Ari’s ex-husband announces he is coming to stay. Not only that but the couple get the news that their son needs a hernia operation, however, when Ari decides to take him back to the US for the surgery, Bini worries that she might never return to Ethiopia…

Corey and Evelin are excited to start planning their wedding, but things hit a bump in the road when Corey admits he had a fling with another woman while they were on a break. But that’s not the only secret between the couple, because as Evelin’s family urge her not to marry Corey, it becomes clear she has a bombshell of her own…

Is there a trailer for Season 3 of 90 Day Fiance: The Other Way?

Yes! In the new trailer we can see all the drama kicking off as couples are faced with the reality of living together. After leaving the US to start a new life with their loved ones, the challenges of life away from home soon hits one half of each of the couples… but which pairing has got what it takes to stand the test of time? And which couple is about to crumble under the pressure?

TSN Archives: The experience of returning to the baseball field after 9/11

Fri Sep 10 , 2021
Share on Facebook Tweet it Share on Reddit Pin it This article originally appeared in the Oct. 1, 2001, edition of The Sporting News. Todd Jones, a reliever for the Twins, was a regular contributor to TSN and wrote a column about his first game back following 9/11. The greatest […]