‘9-1-1’ season 5: Release date, trailer and everything we know about the Fox drama 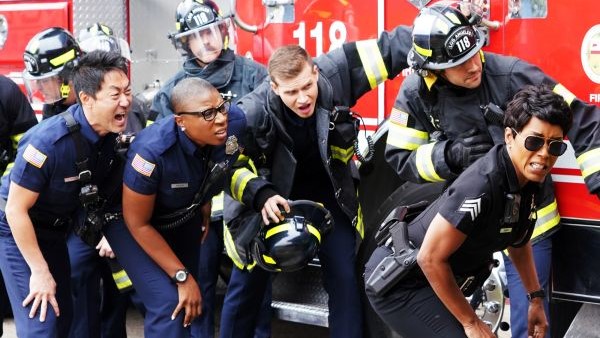 Welcome back to another season of Fox’s 9-1-1, which asks why have a show that just focuses on the police, fire or medical professionals when you can put all of these incredible first responders in one package. It’s been a winning formula, as the Fox drama is returning for its fifth season.

Created by Brad Falchuk, Tim Minear and Ryan Murphy (yes, the seemingly non-stop Ryan Murphy), 9-1-1 has been Fox’s big ticket drama since it debuted in 2018, and has spawned a spinoff series, 9-1-1: Lone Star.

But we’re focusing on the original 9-1-1 here. Read on to find out everything that you need to know about the upcoming fifth season of 9-1-1.

9-1-1 takes place in Los Angeles and follows the multitude of high-pressure situations that the city’s first responders find themselves in. This includes those working for the police, as firefighters, EMTs and at the 9-1-1 dispatch center. We of course follow a specific group of characters, also delving into their personal lives.

Season four of 9-1-1 actually wrapped up pretty nicely, avoiding a cliffhanger for fans to fret about all summer, but let’s give a quick recap anyway. SPOILER ALERT if you are not caught up.

Heading into the finale, the big question was whether or not Eddie would survive the gunshot he took in the penultimate episode. Thankfully, he does, and his shooter (a sniper and disgruntled former SWAT team member) was apprehended. Elsewhere, Athena and Bobby were able to save their marriage; Buck and Taylor became an official couple; Albert became an official firefighter; Hen and Karen met Nia’s birth mother. But perhaps the biggest thing to happen in the finale was Maddie deciding to step away from her job as a 9-1-1 dispatcher, admitting that she needs help to get to a healthy place mentally following the birth of her child.

The latter will certainly be a key storyline to follow in the fifth season, but this is 9-1-1, and of course there has to be a massive emergency to get the season rolling. Here is the official synopsis for the first episode of season five:

“A series or ransomware threats leads to an overabundance of emergencies for the 118, including a medevac helicopter crash at a hospital and an air-traffic control tower system failure. Meanwhile, Athena must revisit her traumatic attack when the case of the realtor serial rapist goes to trial, Eddie suffers a health scare and Maddie’s postpartum depression worsens.”

There were no major casting additions to 9-1-1 in between seasons, so you won’t really have to worry about learning any new faces and names this season.

Fox has given fans a quick tease of what to expect with the premiere episode of 9-1-1. The hacking of Los Angeles with ransomware plunges the city into chaos, as everything from air-traffic control to animals getting out of the zoo is impacted. Angela Bassett’s Athena sums it up best as insanity. Check out the teaser for yourself below.

9-1-1 and 9-1-1: Lone Star had their first ever crossover event last season, as Buck, Hen and Eddie made their way to Texas to help the crew of 126 try and battle a raging wildfire. Can we expect another crossover anytime soon?

The answer is yes, but we’ll have to wait until 2022. The Wrap reported that there will be a second crossover event at some point this season, though it won’t happen at least until March, when 9-1-1: Lone Star is expected to return.

Will the Texas crew come to Los Angeles? How will the relationships forged during the first crossover change? Guess we’ll just have to be patient to find out.

If you can’t tune in live, the latest episodes of 9-1-1 will be available to watch online via Fox Now, though you need a subscription to any of the above services to login and begin watching 9-1-1 or other Fox shows.